Posted by Ted Blue on 5/20/2013 to Articles
Share |
I would like to provide an overview of the most commonly available types of pickups available today, without getting too bogged down in technical details. In subsequent articles I will discuss pickups for individual musical instruments in more detail.

In a nutshell, a “pickup” is a device that detects the vibrations (or resonance) produced by a musical instrument and converts those vibrations into electrical signals that can be sent to an amplifier, mixer board, PA system or recording device.

Basic pickup technology has not changed much in the past few decades (although there have been many refinements), and most of the pickups available today share common features and functionality. For this discussion, we will divide these pickups into the following general categories:

Note that all of these pickups perform the same basic function – that is, to convert vibrations into electrical signals. The technical term for this conversion process is transduction, which is why pickups are also known as transducers.

The most common type of pickup is a contact sensor that is attached directly to an instrument. These pickups are often made from piezo-electric (pressure-sensitive) crystals which is why these are sometimes referred to as piezo pickups or piezo transducers.

Piezo pickups are commonly available as surface-mount sensors but can also include undersaddle pickups and pickups that are placed between surfaces, such as between the foot of a bridge and the soundboard, or that are inserted into the wing slot of a bridge.

Note that the word piezo (pronounced pee-ay-zo or sometimes pie-zo) is Greek for press or squeeze, which is descriptive of how a piezo sensor works. A piezo crystal that is placed under pressure or forcibly deformed (bent, touched, twisted, etc.) emits an electrical charge (or signal), so it has the inherent ability to convert vibrations into electrical signals.

The accuracy of the conversion from vibrations to electrical signals (transduction) determines the quality of the sound produced. In other words, if the original musical vibration is converted with a high degree of accuracy, it will sound very similar to the sound produced by the original vibration. So it stands to reason that in general a more expensive, high quality sensor will produce a more accurate sound than a low cost, low quality sensor.

Other factors that affect the accuracy of the sound of a piezo pickup include the density and type of the material that the pickup is attached to, the pickup’s location on the instrument, and how far the pickup is from the source of the resonance (strings, for example).

Different instruments (and even different parts of the same instrument) will require different types and/or sizes of sensors. A piezo sensor that works well for converting sounds on an acoustic guitar may not work well on an upright bass due to the increased resonance and lower frequency range. A pickup manufacturer may test hundreds of types and sizes of pickup sensors to determine which one gives the best overall response for a particular instrument.

It is important to note that piezo sensors require a certain level of resonance to operate efficiently. The less vibration available, the lower the resulting output of electrical signals. Because of this, piezo pickups tend to work best on instruments that have some sort of a resonating chamber, such as acoustic guitars, mandolins, violins, etc. There is a point at which there may be so little vibration that the piezo transducer does not generate a usable signal, such as on a solid body electric guitar. This is where magnetic pickups can be more useful. 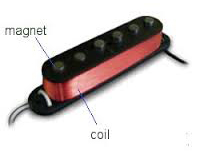 works by creating a small magnetic field which is then disrupted by the vibrations of a steel string. Essentially a magnetic pickup is a magnet surrounded by a coil of wire. When the steel string vibrates within the magnetic field, a small amount of current is generated in the coil of wire, which is then transmitted to your amp or mixer board as an electrical signal. Note that since the string must contain metal to interact with the magnetic field, this type of pickup will not work with nylon strings or strings made of other non-magnetic materials.

With magnetic pickups, there are many factors that affect the accuracy of conversion of the string vibrations to electrical signals, including the magnetic field strength and size, coil wire type and gauge, number of windings in the coil, steel content within the string, and so on.

A microphone is another commonly used transducer that converts air vibrations into electrical signals without requiring direct contact with the instrument. Because the source of the sound is the vibrations of the air after they are emitted from the instrument, it would seem that this would produce the most accurate sound reproduction possible. This is true to a certain degree, but the sound quality can also be affected by the type, construction and quality of the microphone itself, as well as its mounting location relative to the sound source.

For stage use, since a mic converts vibrations directly from the air it may also pick up the vibrations of other sound sources nearby – such as the drums or the bass player. This can muddy the sound and lead to feedback issues that can be difficult to resolve. For this reason, mics are often sold as part of a pickup system that also includes a piezo or magnetic pickup. Mics are preferred when recording, where accuracy is very important and you have more control over the performance environment.

Note that most instrument microphones are condenser mics, which will require a power source to operate correctly. This power can be supplied by an onboard preamp driven by a 9 volt battery, or from an external power unit that sends power through the cable.